Being Transparent: Sharing the “Why”

Being Transparent: Sharing the “Why”

A quick story with a useful leadership lesson:

I was recently having dinner with a client group after a long workday at an offsite meeting. The hotel conference room was very nice, as was the dinner, which had more guests than were invited to the meeting itself. I became engaged in conversation with a man from Scandinavia, and naturally I asked him how he was connected to the group that was hosting the dinner. I learned that he was a sales director based in Europe, whose work focused on selling specialized consulting services that would be delivered by the group.

“Why weren’t you at the meeting today?” I asked him, recognizing the strong connection between his sales role and one of the core strategic issues that had arisen during the course of the meeting earlier in the day.

Soon thereafter I talked with my client, the leader of the group, and told her about my conversation with the sales director. I asked her if it was true that he was not invited to the meeting, and she said, “That’s right. I couldn’t invite him.”

Couldn’t invite him? His role is key to their success, and there had been concerns about alignment about their team goals and approaches. In my view, he needed to be there.

“Well, as much as I’d have liked to invite him and his three global peers, that would have raised the total number of meeting participants to more than 19. And I can’t really invite more than 19 people to a meeting.”

“Because the company has really burdensome rules about meetings that cross the threshold of 20 people. There are all kinds of approvals that are needed and it makes planning very challenging.”

This was a situation when a policy (well-intended, I suspect) resulted in unintended, unproductive consequences. “Not the first time this has happened in the corporate world”, I thought to myself. Being focused on the effectiveness of the group, including communication and governance, I asked her if she had shared the policy with the sales team. Did they know why they weren’t invited to a meeting that would be important for them to participate in? “I don’t think I ever told them about the policy. It’s not really their concern; it’s a corporate hassle that they don’t need to know about.”

But they did need to know about it, I advised her. They need to know that she recognized the importance of having them there, that if it were up to her they would be there, and that she would see what she could do to navigate the policy next time so they could be there. It’s important that her team know why they were not included in a meeting that mattered to them- a meeting at which their input would have been beneficial.

This is what Transparency is all about. The sales team here could have easily misread the leader’s intentions. Communicating why they were not invited to this meeting would assuage their concerns and reiterate her commitment to their involvement in the team, and in doing so help to build trust and connection. It might also have invited some sharing of ideas and experience in maneuvering through company policy, including creative suggestions for how to include all necessary participants in the meeting. While she was well-meaning in trying to shield people from an onerous process, the impact was confusion, disappointment, and perhaps worse. Perhaps they thought she hadn’t considered inviting them, or that she was being secretive in excluding them. Either way, communicating the “why” and making her thinking transparent would have had great benefit in this situation.

The opportunity here is to look for where we as leaders can be more transparent with our intentions so as to minimize misunderstanding and mis-attribution of motives. Consider what opportunities you have to share your decision-making process with your team/your peers.

Of course it is not always best to share one’s inner thinking (some information is not meant to be shared with others, at least not until it’s ready to be shared). But for the most part leadership transparency is good. So share the “why”. Doing so will help build your credibility and trustworthiness in the eyes of your team. 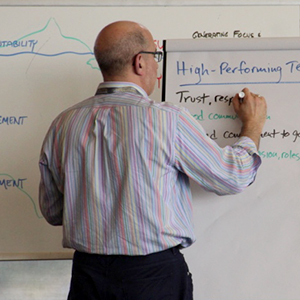